Sandwiched between its massive neighbors China and India, Nepal is a landlocked country of astonishing diversity. Its topography varies wildly, ranging from tropical lowland jungles to the frozen summits of the highest mountains on earth.

The Himalayan kingdom is also renowned for its rich cultural heritage, with over 100 ethnic groups speaking more than 90 languages and practicing a multitude of faiths. With this much variety, there’s something in Nepal to entice every type of visitor.

Our country is recognized as one of the best in the world for adventure activities, and thousands of travelers are drawn from all over the globe to enjoy our sublime opportunities for hiking, trekking, mountaineering, and sightseeing each year.

But where should you start? There are dozens of first-class trekking routes here in Nepal, and each offers its own bewitching combination of physical challenges, grand Himalayan scenery, and authentic encounters with the local culture.

That’s why Alpine Ramble Treks has curated this list of the five best trekking routes in Nepal. We believe that there’s a trek for everyone here—keep reading to discover which one is right for you! 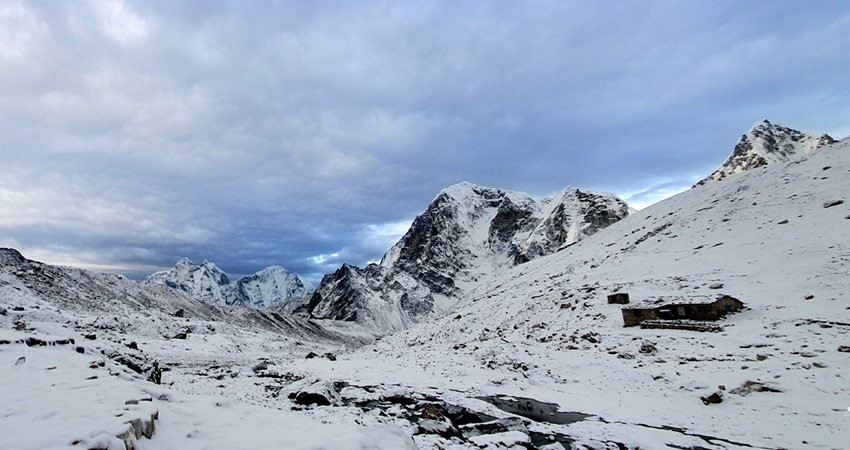 If there’s one thing every traveler knows about Nepal, it’s where to find Mount Everest.

The tallest mountain in the world is situated in the high-altitude region known as the Khumbu, where hardy Sherpa villagers lead sure-footed yaks along ancient trade routes and seasoned climbers mount ambitious expeditions to lonely summits of rock and ice.

The Khumbu is also home to Sagarmatha National Park, where Himalayan tahr and musk deer roam alpine pastures and forests of pine and rhododendron.

But you don’t have to be an intrepid explorer or an experienced mountaineer to enjoy the splendor of the Khumbu.

The well-maintained trail to Everest Base Camp passes through countless hillside communities, where you can stay in charming teahouses and enjoy all of the creature comforts of home.

You’ll also get a firsthand glimpse into the daily lives and fascinating traditions of Himalayan villagers, who are always eager to share their stories and experiences with travelers. To ensure that everyone has access to the Everest region, Alpine Ramble Treks has prepared several different trekking packages.

Our flagship eight-day itinerary is perhaps the best way to experience the Everest Base Camp Trek for yourself, but we are proud to offer a whole host of alternate packages in the Khumbu for your consideration.

No matter which route you choose, one thing’s for sure: if you’re looking for a challenging and rewarding trek with the most spectacular mountain views on earth, the Everest region should be number one on your list.

The Annapurna region takes its name from a spectacular Himalayan massif comprised of six separate peaks. The highest of the bunch is Annapurna I: clocking in at 8,091 meters, it’s the 10th highest mountain in the world.

By some metrics, the Annapurnas are actually the most popular trekking destination in all of Nepal—and it’s easy to see why. This magnificent expanse of snow-capped mountains and rushing rivers boasts stunning scenery comparable to anything you’d see on the Everest Base Camp Trek, but without any costly flights required to get there.

The most popular trails in the region can be accessed directly from the beautiful city of Pokhara, which lies just a half day’s drive from Kathmandu.

And there are plenty of routes to consider when you arrive, from the epic two-week Annapurna Sanctuary Trek to an accessible five-day version of the Annapurna Base Camp Trek—and everything in between.

Most trekking in the Annapurnas is done at comparatively low elevation, keeping the difficulty at a moderate level that’s appropriate for most hikers.

This also means that you can trek comfortably year-round in this part of Nepal, whether you prefer the crystal-clear views of autumn and winter or the warmer temperatures of spring and summer.

And while autumn is the busiest season for travelers, it’s still possible to enjoy authentic encounters with villagers of both Nepali and Tibetan descent on even the most popular trails.

With blue skies, white mountain summits, and quiet villages distinguished with pastoral charm, the Annapurnas have an impeccable pedigree.

That’s why this region ranks second in our lineup of the five best trekking routes in Nepal. 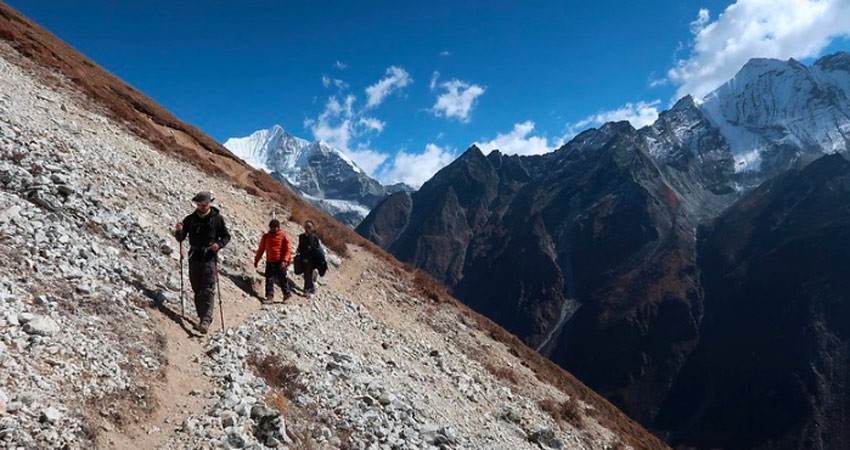 While it doesn’t yet have the name recognition of the Everest region or the Annapurnas, Nepal’s Langtang Valley is a rising star on the country’s trekking circuit.

The trails that twist and turn across this breathtaking landscape of alpine meadows and mysterious forests can be accessed from the very outskirts of Kathmandu, and there’s no better place to escape the hustle and bustle of the city at a moment’s notice.

Historic trading routes crisscross this region of Nepal, linking the country with Tibet to its north. As a result, many of the towns and villages in the Langtang Valley are populated by people of Tibetan ethnicity.

Travelers looking for a genuine glimpse into a Himalayan culture on the path less traveled would do well to consider embarking upon an adventure in the Langtang Valley.

Alpine Ramble Treks has developed a wide variety of itineraries in order to explore the Langtang Valley to its fullest.

From the glaciated peaks of the Langtang Himal and the Ganesh Himal to the holy waters of the icy Gosaikunda Lake, our experienced trekking guides will show you firsthand what makes this region so special.

Our classic Langtang Valley Trek is the best way to get up close and personal with the colossal mountains of the Langtang Himal, while the lower-altitude Helambu Circuit Trek offers superlative opportunities to wander across rolling pastures and farmlands in the company of local villagers.

Most visitors to Nepal head straight to Mount Everest or the Annapurnas, even though the Langtang Valley sits right on Kathmandu’s doorstep. Don’t make the mistake of overlooking this beautiful and exciting destination—it’s one of the very best places to trek in all of the Himalayas. 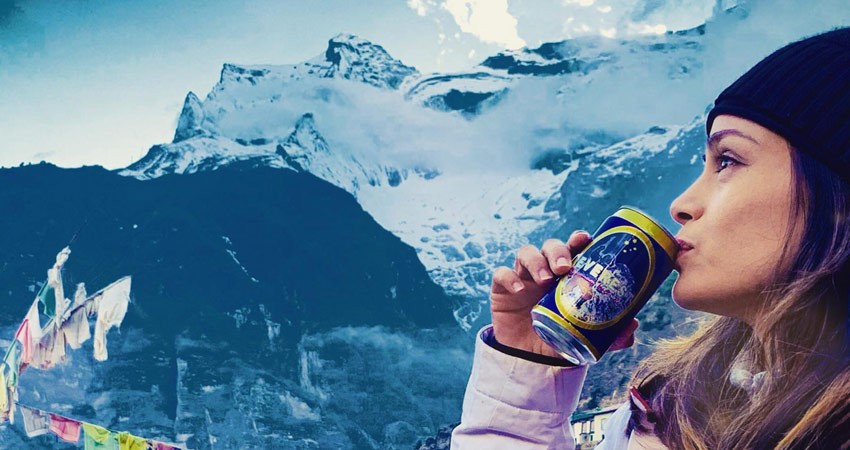 In the far north of Nepal’s central region rises the sharp summit of Manaslu, the eighth-highest mountain in the world.

Trekking around Manaslu has only been possible since 1991 when the surrounding territory was first opened to international visitors.

The circuit has since earned its place of distinction on our list of Nepal’s best trekking routes, thanks to its spectacular mountain vistas, enchanting villages, and crowd-free trails.

If you’re looking for an intrepid hiking itinerary that represents an extended sojourn into the heart of the unspoiled Himalayas, you’ll want to make this trek your first priority.

This trailblazing route begins by following the Buri Gandaki river into a remarkably mountainous region, where friendly villagers of Tsum, Nubri, and Gurung ethnicity practice religious customs influenced by their close historical association with Tibet.

The trail also winds its way through the Manaslu Conservation Area, where you might spot the Himalayan tahr or blue sheep cavorting on the lower slopes of the mountains.

Tackling the Manaslu circuit can be a bit more demanding than trekking in the Everest or Annapurna regions, not least because this route requires at least 12 days on the trail.

But if you’re up for the challenge, there’s no better place in Nepal to soak in dazzling views of the Ganesh Himal range, the Annapurna massif, and—of course—Manaslu itself.

Alpine Ramble Treks has crafted several unique trekking itineraries around Manaslu to cater to every type of visitor.

Our classic 12-day Manaslu Circuit Trek is our most popular offering, but travelers whose time and budget allow for a lengthier exploration of this wild region may want to consider our 15-day Tsum Valley Trek to see even more. These treks can also be combined for a truly epic 26-day itinerary that leaves no stone unturned! 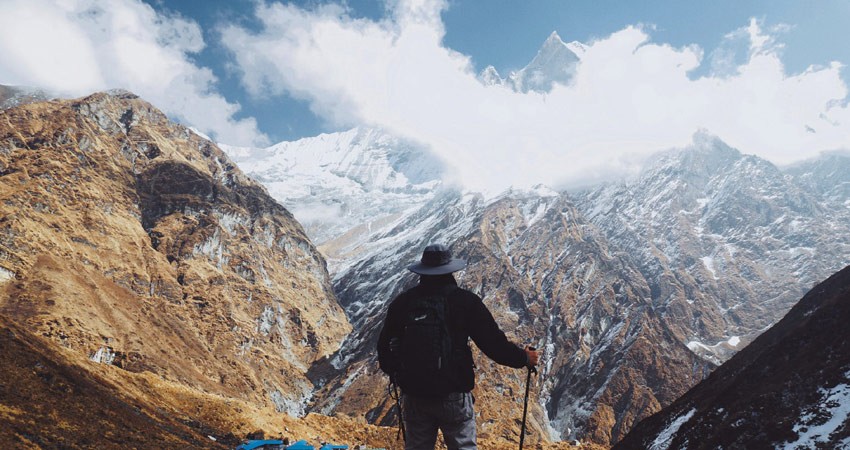 There’s no shortage of epic, rambling itineraries in the Annapurnas that venture into the midst of the Himalayas. But you don’t necessarily need to hike very far to see these mountains in all of their stature and glory.

For visitors with less time to spend on the trail, there’s no better trek than the Ghorepani Poon Hill Trek, also known as the Annapurna Panorama Trek. Poon Hill is a striking hilltop vantage point that can be easily reached from the lakeside city of Pokhara.

The hill is especially spectacular at sunrise, with the light of the rising sun breaking across the summits of Dhaulagiri, Annapurna I, Hiunchuli, and many more Himalayan giants.

On a clear morning, this magnificent mountain panorama rivals anything you’d see on a much longer trek.

Best of all, the Ghorepani Poon Hill trek can be accomplished in only a few days. This short-but-sweet hike begins in the town of Nayapul, just a stone’s throw from Pokhara.

From here, the trail is comprised of scenic river crossings, quiet forests of bamboo and oak, and intersections with bucolic mountain villages. You’ll journey through the communities of Tikhedhunga, Tadapani, and Ghorepani, after which the trek is named.

While the trail can be busy, it’s nonetheless an excellent way to meet Gurung villagers and learn more about their culture. After enjoying the view from Poon Hill, we’ll return to Nayapul on a different route, passing through Ghandruk rather than retracing our steps.

This ensures that even on a short trek, there are always exciting new sights just around the corner.

If you need help deciding which trekking route is right for you, please don’t hesitate to Contact Us.